Currently the route to the Results page is undergoing a transition. For SACs, SPAs and English SSSIs the user has only to select a Site - the results page then displays all the features in a collapsible table format making it easier for the user to compare feature information. For Scottish, Welsh and Norther Irish SSSIs the user still has to select a feature and then proceed to the Resutls page on a feature by feature basis.

This user guide will walk you through examples of the selections screens and will also explain what the results mean.

The SRCL homepage is the starting point for looking up data on a particular site or source.  This page also includes links to the project report, user guide and online tutorials. 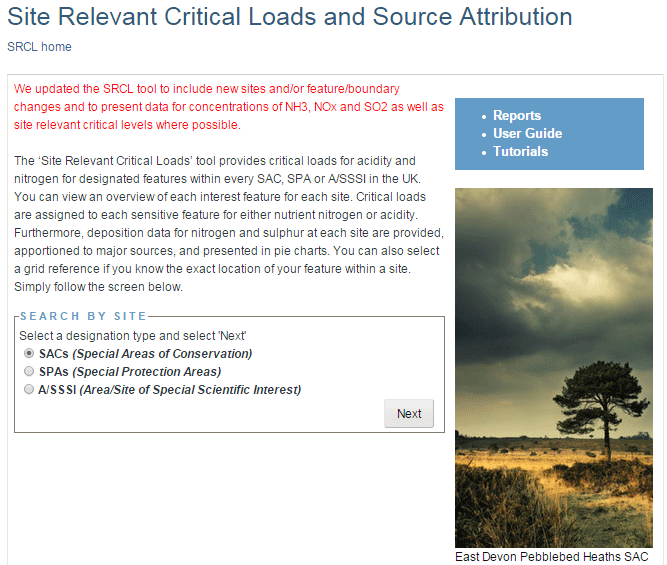 Select a designation type (e.g. SAC) then click ‘Next’.

There are two ways of selecting a site. You can either:

1.       Start typing in the ‘Site’ input box to show the site lists (see Figure 2). After 2-3 characters the list will appear. It is not case sensitive. Then you must select the site (e.g. Dungeness) from the drop-down list and click ‘Next’

2.       Choose the site from the list below (Site Selection box), which can be filtered by country (e.g. England). Select your site (e.g. Dungeness) in this box and click ‘Next’. 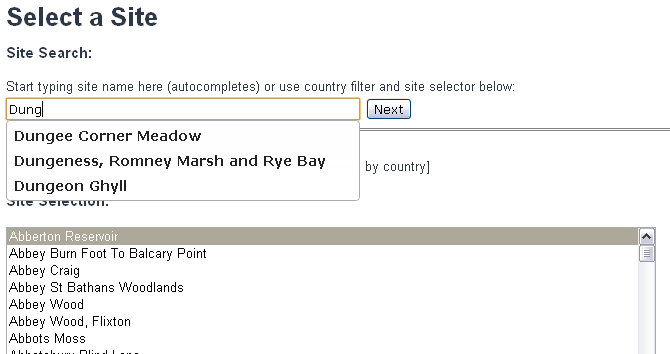 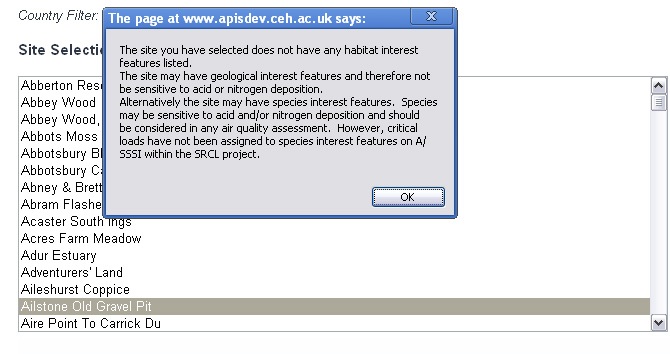 Figure 3: Alert box when no interest features are present

For SACs, SPAs, and English SSSIs the user no longer has to select indivdual features, all features are displayed on one Results page (see Figure 4 below).

This is the new Results page showing a list of all the features at that site. The tabs provide information on critical loads and levels for 5 key pollutants - nutrient nitrogen, acidity, ammonia, nitrogen oxides (NOx) and sulphur dioxide (SO2). Other tabs provide information on the concentrations and depositions at a site, the critical load exceedances together with graphs and source attribution. Features are by senstivity with the most sensitive at the top of the list.

Figure 4: Results page showing all features at a site

By clicking on the + icon you can view the full inforamtion for each feature (Figure 5). Information is provided as to whether the feature is senstive or not and crtical loads/levels are given where available. 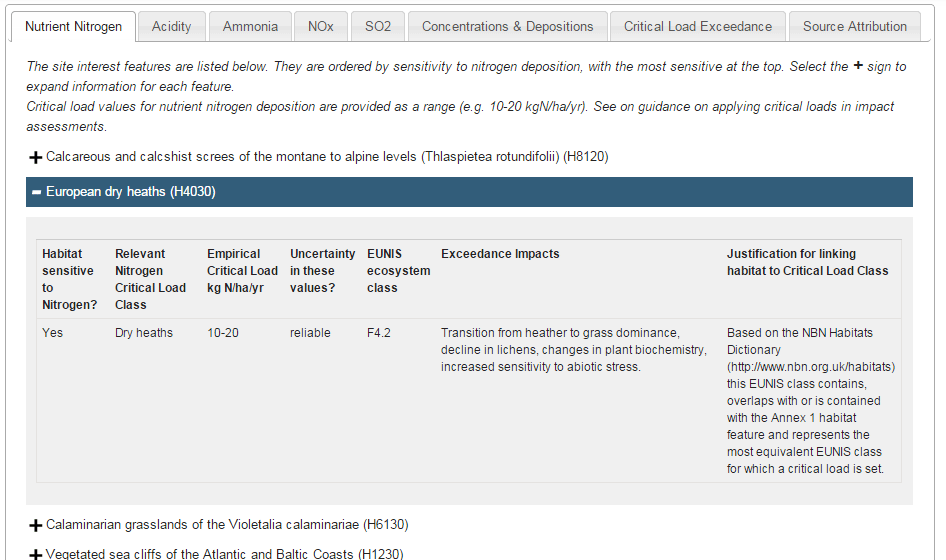 Figure 5:  Resutls page with 'clickable' icons to show details for each feature.

The 'Concentration & Deposition' tab shows the concentrations and depositions across the site (Figure 6). This are given as a maximum, minimum and average values. Each feature has its own set of site values as pollutant deposition to some habitats (e.g. forest habitats) have higher deposition values. 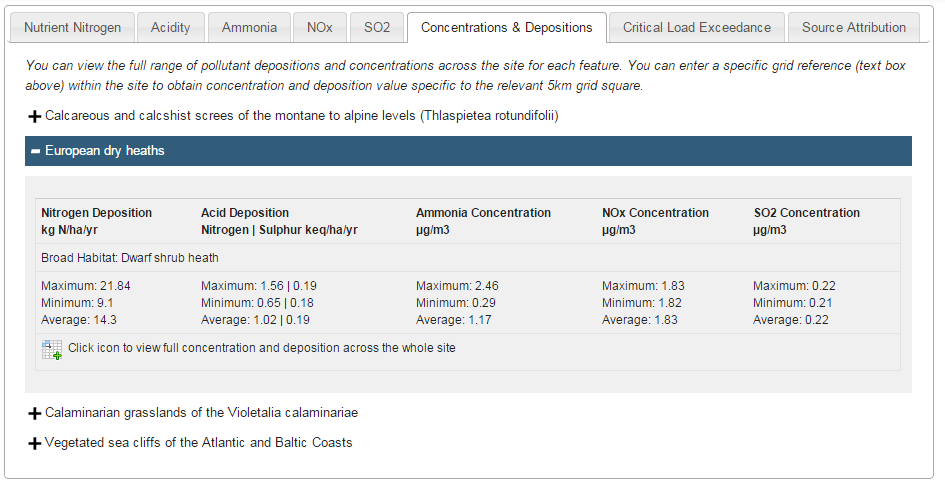 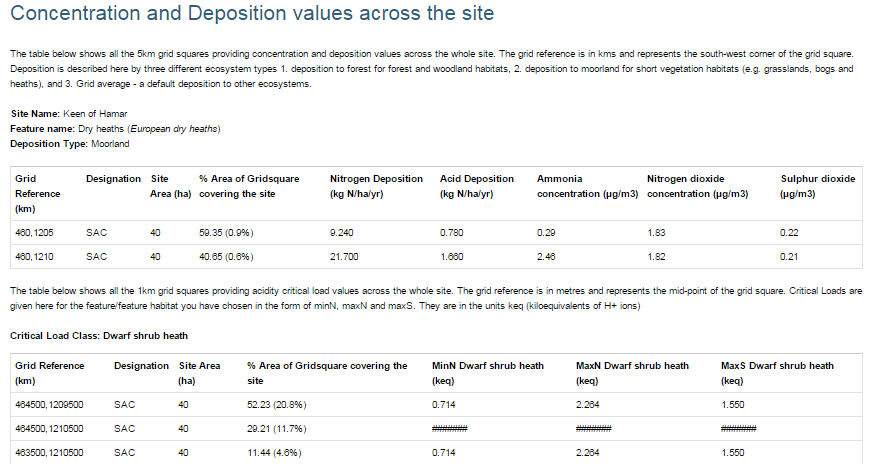 Figure 7: Concentration and deposition values across the whole site.

Critical loads graphs for nutrient nitrogen and acidity are also provied for each senstive feature as shown in Figure 8.

The acidity critical load is represented by the critical load function graphs as seen in Figure 10. In cases where a grid reference has not been specified, and a site covers more than one 1km2 grid square for which acidity CLs are calculated, the minimum CL function and maximum CL function is presented to show the range of sensitivity across the site. 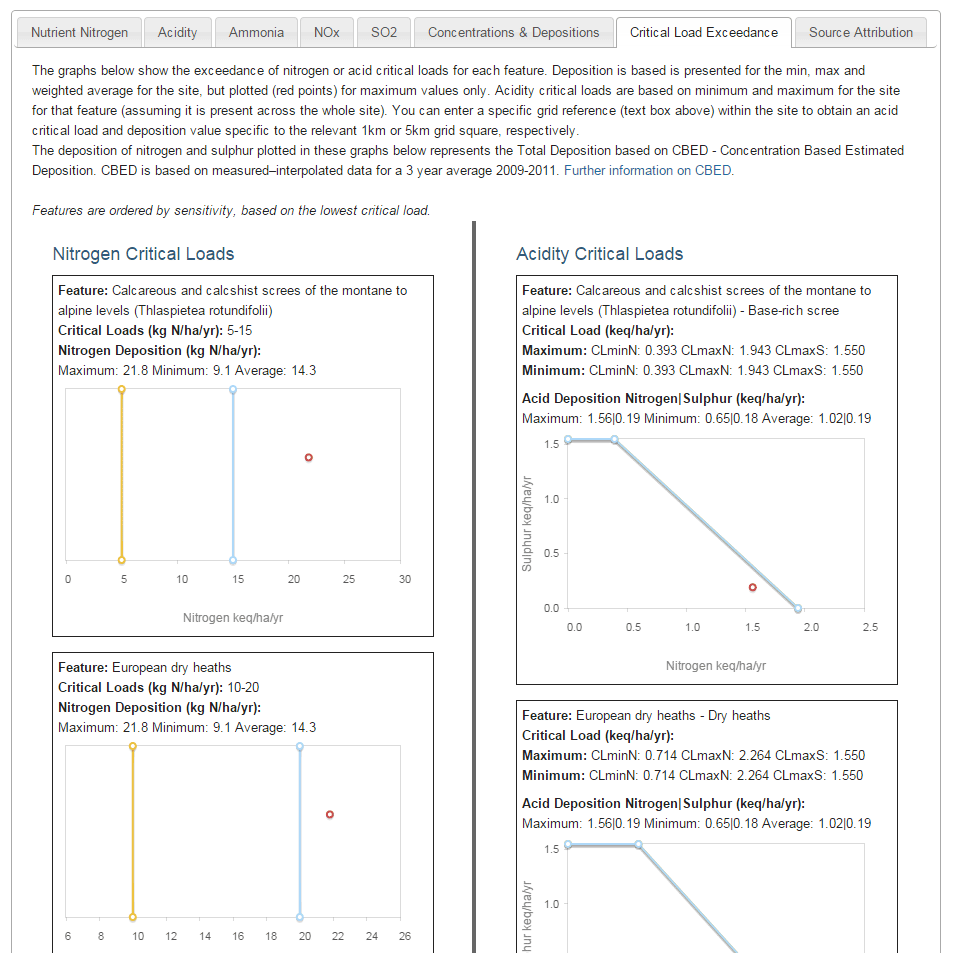 Finally the 'Source Attrobution' tab (Figure 9) provides a link to a seperate page that shows, in a pie chart, the contribution of a source at a site for nitrogen and sulphur (Figure 9).

SSSIs in Wales, Scotland and Northern Ireland ONLY

For A/SSSI in Wales, Scotland and Northern Ireland, the “select an interest feature” screen is still provided as the categories used to define habitat interest features are very broad in their classification. They are based on the reporting categories used by JNCC for A/SSSI reporting in 2006. First, you will need to select the reporting category for the interest feature you wish to assess (top window), then a new set of habitats will be shown in the second window (see Figure 11). These are more detailed to give you a better chance of selecting the right feature habitat for the site you are looking at. For guidance on the relationship between the relevant reporting categories used in APIS and Broad and Priority habitats, please read the background page to assigning critical loads to A/SSSIs (link in  the red highlight circle) 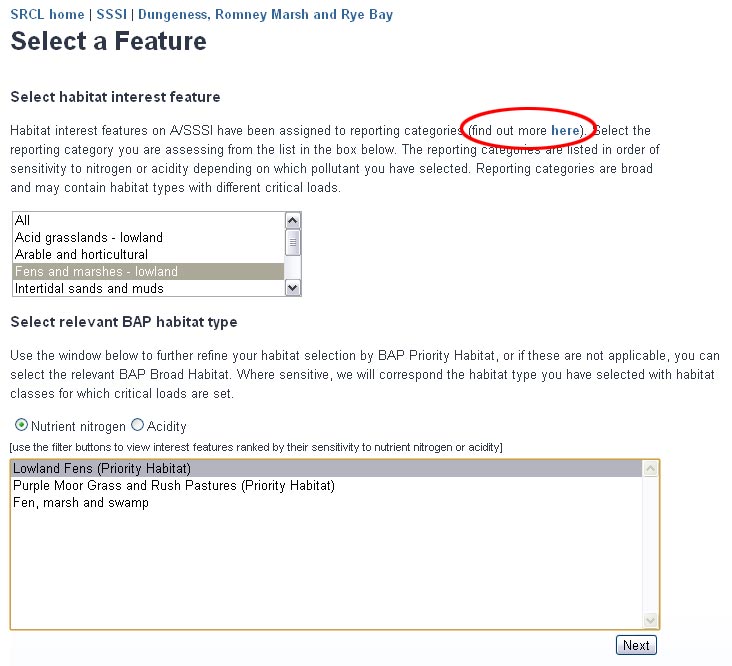 The results page for non English A/SSSIs varies from that of SACs and SPAs. The user will sometimes be required to further define the habitat type at the site in order to select the relevant critical load based on EUNIS type (EUNIS is a European habitat classification upon which nutrient nitrogen critical loads are based). This is because there is sometimes a range of sensitivity, and hence a number of critical loads, associated with the broad/priority habitat selected and so the user has to choose the best fit with the A/SSSI they are interested in. Links to habitat correspondence tables provided by JNCC and to site information provided by the country conservation agencies should be used to help pinpoint the best EUNIS habitat. On selecting a EUNIS habitat the tabbed content is updated in an instance. The “select a EUNIS Habitat” box includes all the EUNIS types which correspond with the priority or broad habitat selected. Not all of these will have nitrogen critical loads associated with them because nitrogen critical loads are only set for a subset of habitats within the classification (reflecting which habitats have been studied and hence for which there is empirical evidence). The EUNIS categories are listed by sensitivity so if you do not know which is relevant to the interest feature for the site you are reviewing, in first instance (e.g. for screening assessments) pick the most sensitive.

The information in the first tabbed area gives the basic sensitivity information for nutrient nitrogen and acidity.  Use the justification buttons (

) to show what the justifications are for assigning critical load classes to the habitat features. 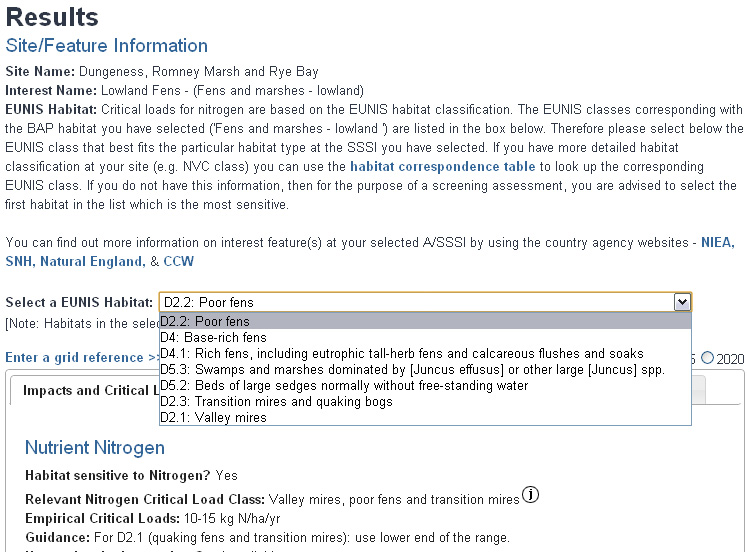 The acidity critical load is represented by the critical load function graphs as seen in Figure 13. In cases where a grid reference has not been specified, and a site covers more than one 1km2 grid square for which acidity CLs are calculated, the minimum CL function and maximum CL function is presented to show the range of sensitivity across the site. 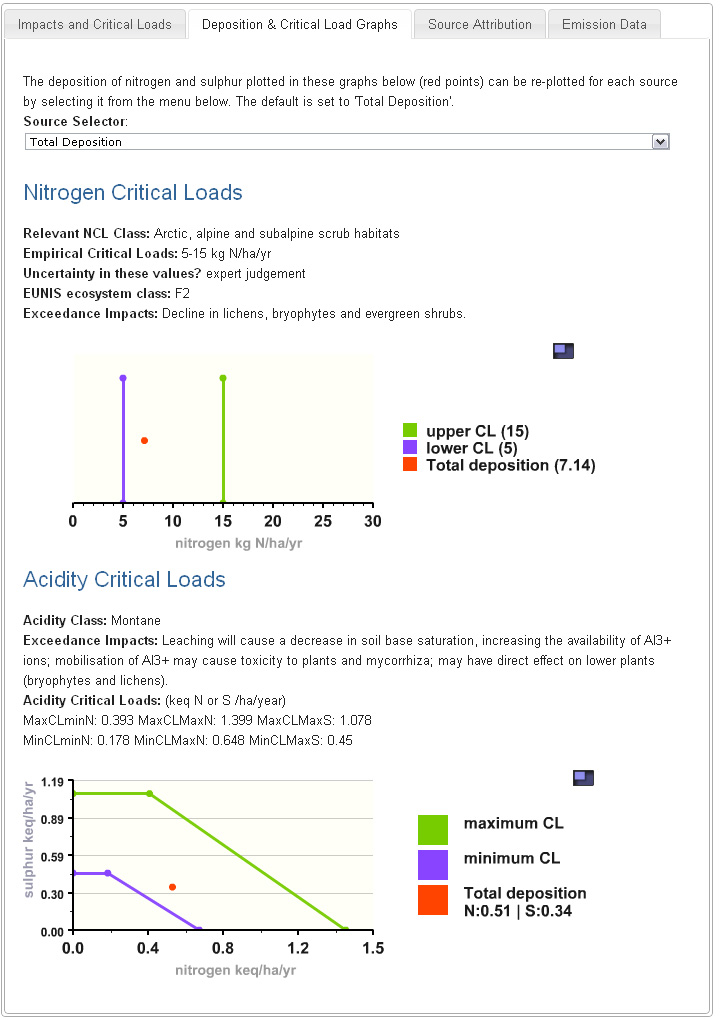 The pie charts below show the proportion that each source contributes to the total deposition of nitrogen and sulphur to the selected feature at the selected site.  156 sources were modelled and the pie chart shows the sources that contribute the most deposition at each site. At every site, the total deposition is the sum of individual source contributions to deposition. For detailed information on each source, the user can open the ‘Emission Data’ tab (Figure 12) where a table of the emission statistics of each source for 2005 (‘current’ year) and 2020 (future year) can be found. The individual source values are rounded so will often not add up to the Total Deposition. 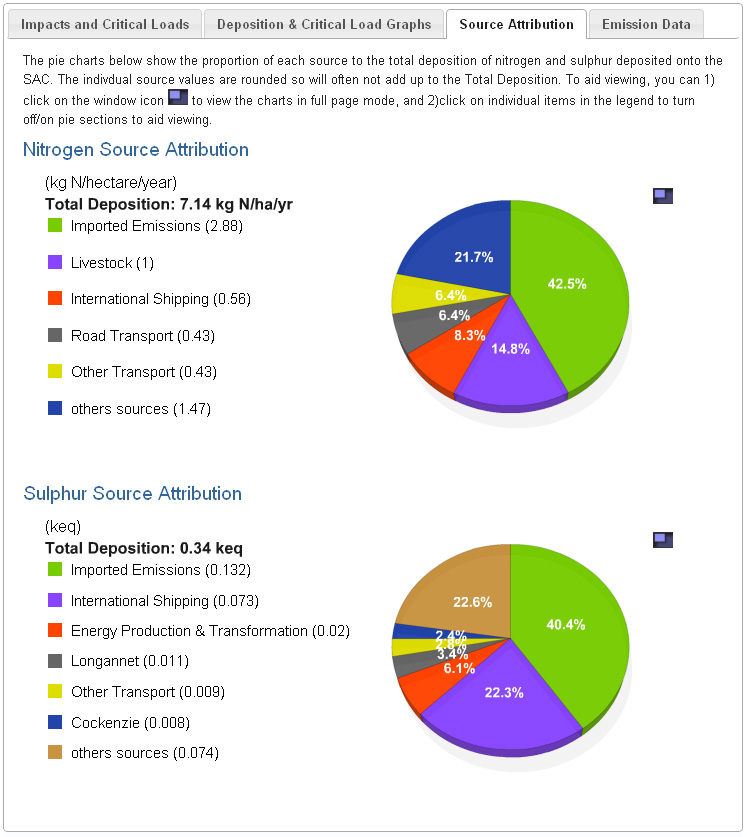 The emission data tab (Figure 13) provides a table of all the sources that were modelled for the SRCL tool. There are around 156 sources in total, each source contributing an apportioned amount of nitrogen and sulphur deposition to each designated site. The total deposition (as seen plotted on the critical load graphs - red point) is the sum of all the sources at any one site. The table is ranked by nitrogen and sulphur emissions showing the largest emitters at the top. 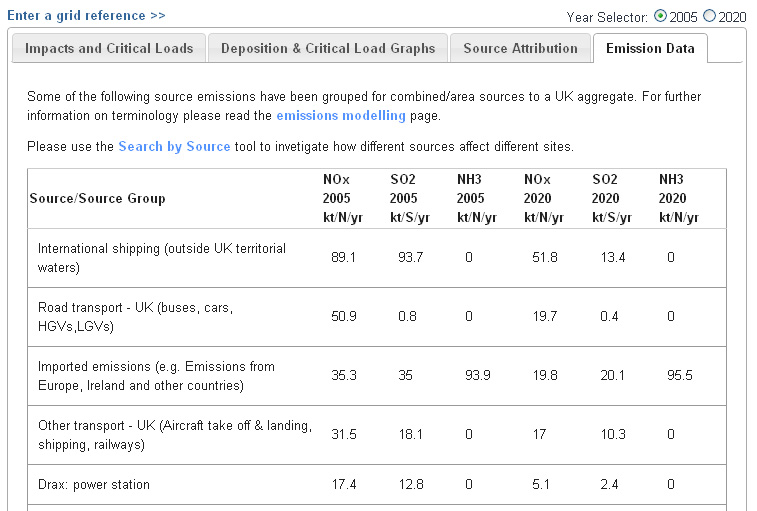 Results for SPAs and SAC species

Critical loads are not established specifically for species (e.g. birds).  In order to assess the impacts of nitrogen deposition and acidity on bird species and assemblages, or Annex II species, consideration is given to how a change in the species’ habitat, as a result of deposition, could indirectly impact the species.  So critical loads are assigned to the supporting habitat for the species and a scientific judgment is made as to whether the impacts on the habitat would translate into an indirect effect on the species.

Therefore, for bird features or other species, although the habitat on which it depends (breeds, feeds or roosts) may be sensitive, the features themselves may not be negatively affected by the change in the habitat as a consequence of critical load exceedance (Figure 14). In this example the impact on the Osprey’s nesting habitat -  ‘Coniferous Forest ‘ does not affect the Osprey itself – so it is deemed not sensitive.  The results page still provides information on critical load exceedance of the supporting habitat.

In some cases there is more than one habitat listed for the species on the results page, to reflect where the species/assemblage resides, breeds, feeds or roosts.  You should use the habitat which is relevant for the interest feature at the site you are assessing. From the example in Figure 14 you can see that there are two rows for Osprey:  broad habitats ‘Standing open waters and canals’ and ‘Coniferous Forest’. 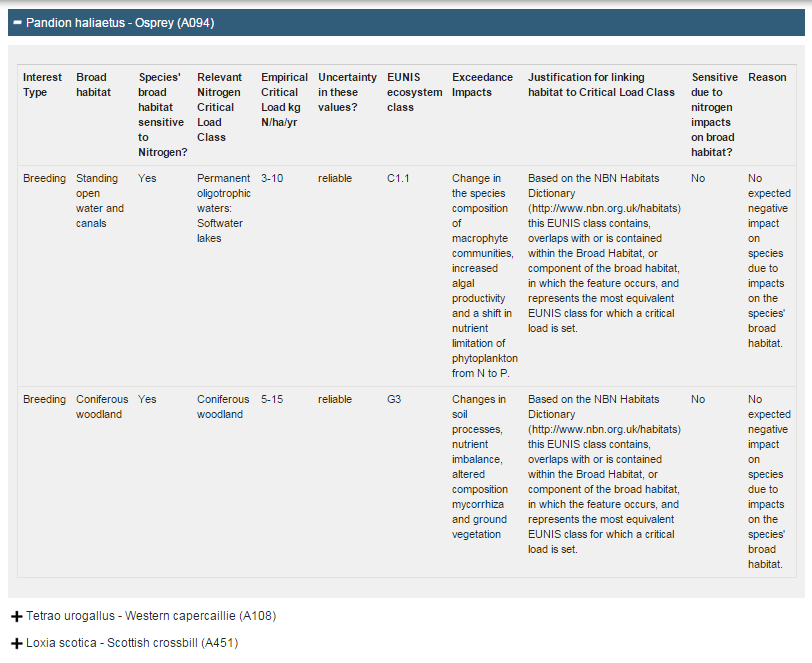