Sulphur (S) emissions are no longer the main cause of acidification, however there may be a legacy effect. Since the deposition of nitrogen oxides and ammonium also lead to acidification, and these emissions are declining much more slowly, acidification is still a cause for concern, albeit much reduced from the days of high SO2 emissions.

Acid deposition represents the mix of air pollutants that deposit from the atmosphere leading to acidification of soils and freshwaters. It mainly consists of pollutants emitted by the combustion of fossil fuels (e.g. power generation). The removal of these pollutants from the atmosphere is in the form of wet deposition in rainfall, cloud-water or occult deposition, mist and dew, but also includes dry deposited acidifying gases. Rainfall that is acidic, possesses elevated H+ ion concentrations, and has been commonly known as ‘acid rain’.

Today, the contribution from SO2 is considerably smaller than during the 1970s, so that currently, oxidised and reduced nitrogen dominate acid deposition. Deposition of reduced nitrogen (N) compounds, e.g.NH4+, can acidify via microbial transformations in the soil and also assimilation in plants leading to acidification of the rhizospehere. Other compounds also contribute to acid deposition, e.g. hydrochloric acid (HCl)

Strictly speaking, not all components comprising acid deposition are acidic, although they have an acidifying effect on soils and freshwaters. For example, sulphate, nitrate and ammonium are not in themselves acidic, but can be associated with acid protons that can be released through transformations in the soil or on leaf surfaces, e.g. via oxidation, nitrification, mediated by microbes and nitrifying bacteria. Anions, negatively charged ions such SO42- and NO3-, can also acidify through the mobile anion effect: anions are poorly retained by soil, and as they move through the profile, strip off base cations, exhausting the buffering capacity so that eventually toxic acid cations such as Al3+ and H+ come to dominate exchange sites. 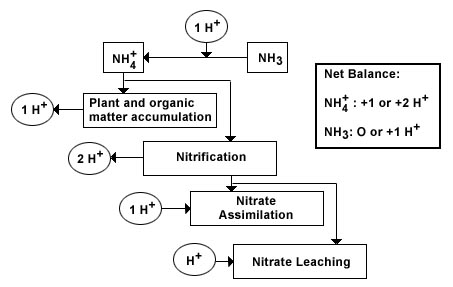 Figure 1: Effects of reduced N, NH3 or NH4+ inputs on soil proton balances. The production of H+ depends on the form of NHx input and the fate of the NH4+ ion. Diagram modified from Binkley and Richter (1997).

Emissions of primary pollutants contributing to acid deposition have reduced substantially since the 1980s, mainly in response to international control measures (e.g. UNECE Convention on Long-range Transboundary Air Pollution (CLRTAP), and, more recently, the EU National Emission Ceilings Directive (NECD)). Detailed estimates of the spatial distribution of concentration and deposition of pollutants have been provided by Atmospheric Transport Models (ATMs). From 1970 to 2010 SO2 emissions decreased by 94% whilst ambient rural concentrations reduced by 90% between 1987 and 2008 (RoTAP, 2012).

Concentrations of acidity and sulphate in rain declined on average by 85% and 75% respectively over the last 20 years, with the decline in sulphate accounting for 75% of the decline in acid deposition. However, this decline is not equal over the whole of the UK. Deposition in areas remote from sources has fallen by disproportionately smaller amounts than deposition close to sources, e.g. central and eastern England, reflecting the smaller decline in wet deposition (-57%) compared with dry deposition (-93%). International shipping emissions have emerged as a significant source of S and N, contributing 18% and 19% to the emissions of oxidised N and S during 2005, but these emissions should fall significantly by 2020 with implementation of the MARPOL convention. Between 1986 and 2006 S deposition decreased by 80% whereas N deposition has changed little. Reduced N is expected to dominate acid deposition chemistry in the future.

Acid rain was responsible for large-scale damage to aquatic ecosystems and forests in Scandinavian countries, south eastern Canada, north eastern United States, south west Scotland (Galloway), Wales and Germany. Gaseous precursors, such as acid gases, can also cause direct damage to sensitive vegetation when they deposit in sufficiently high concentrations, e.g. SO2 damage to sensitive lichens. High altitude forests are especially vulnerable as they are often surrounded by clouds and fog in which acid ions are more concentrated. In coastal areas concentrated sea mists have caused lesions on leaves (Maine/Canada). Once the pH falls below 3.0 the likelihood of visible injury lesions, ‘burning’ and premature senescence and leaf fall increases (Cape 1993).

Reproduction in both birds and plants appears to be sensitive to acidification, e.g. egg shell condition and seed production, viability and germination. Eggshell thickness often declines as the availability of calcium in the diet falls in response to acid leaching (Nybx et al 1997; Ramsay and Houston 1999). Many crustaceans cannot inhabit acidified waters due to the low availability of calcium (Havas and Rosseland 1995; Muniz 1990).