The framework of ecosystem services (UK NEA 2011; TEEB 2010) can help capture in a systematic way many of the unintended consequences of policy actions or management decisions. The UK Department of the Environment Food and Rural Affairs (Defra) has adopted the Ecosystems Services Approach (Defra, 2007) as a risk assessment methodology to answer policy questions such as “What are the costs and benefits associated with controlling air pollution?” There is also a strong interest in estimating a value associated with the increase or decrease in a particular service. This value is usually, but not exclusively, a financial value.

Air pollution affects ecosystems in a number of ways, altering basic ecosystem functions such as primary production (plant growth) and biogeochemical cycling which in turn affect the ecosystem services and therefore the benefits that humans get from the environment such as timber, clean drinking water and an appreciation of nature. The complex causal chains by which air pollution subsequently affects a range of ecosystem services have been reviewed extensively elsewhere, bringing together the evidence for these links (Jones et al. 2014a; 2014b; Mills and Harmens, 2011, Harmens and Mills, 2012, Mills et al. 2013). The main mechanisms of impact of current pollutant levels are eutrophication (nitrogen), acidification (nitrogen and sulphur) and direct toxicity (ozone, ammonia and nitrogen oxides) all of which affect a wide range of services due to their impacts on underlying ecosystem functions and processes (Figures 1-3). The evidence for pollutant impacts on individual habitats can be found elsewhere on the APIS site. In this section we briefly outline how these impacts can be valued using the ecosystem services approach. 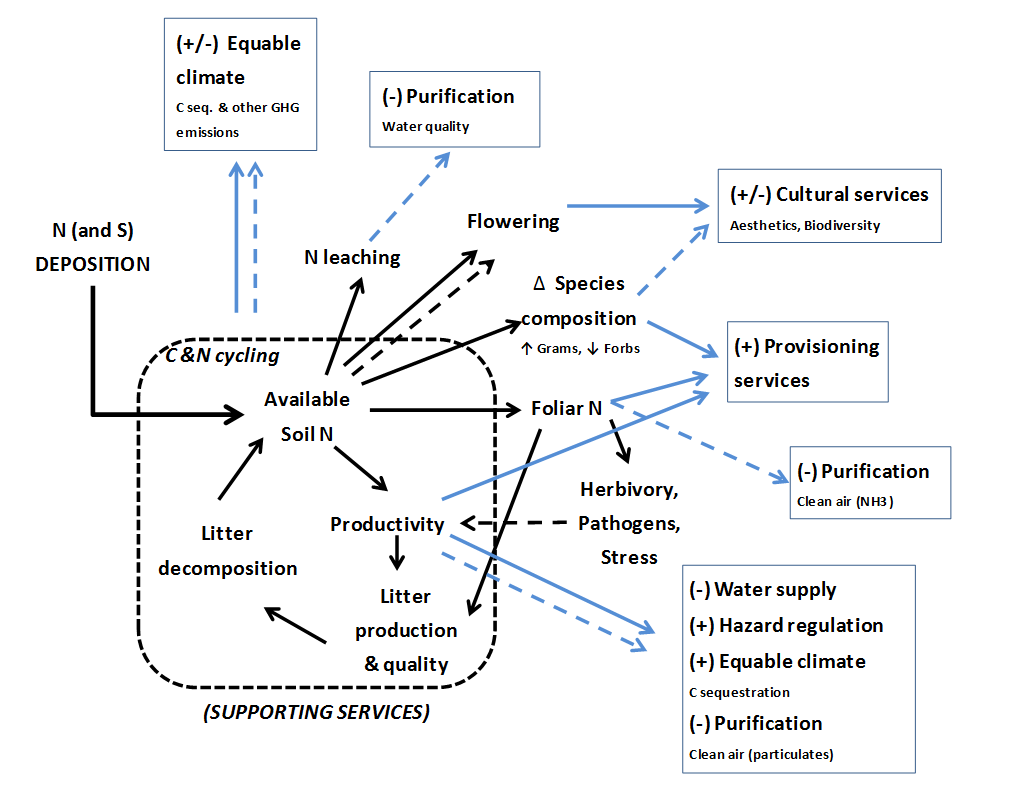 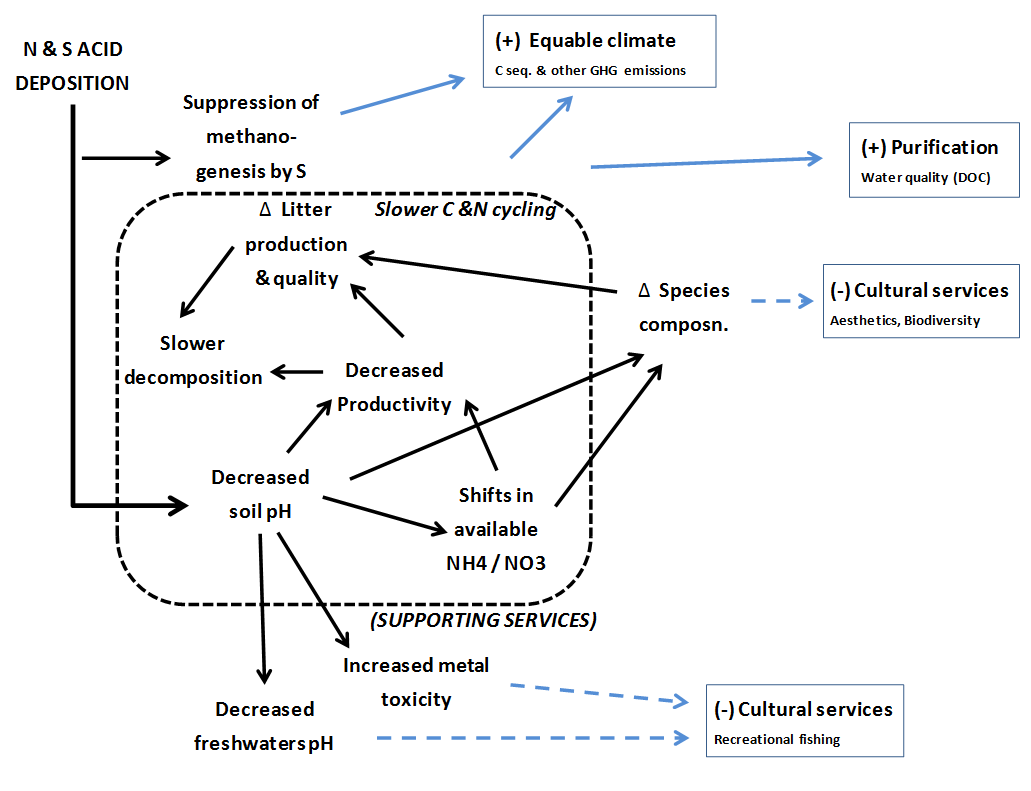 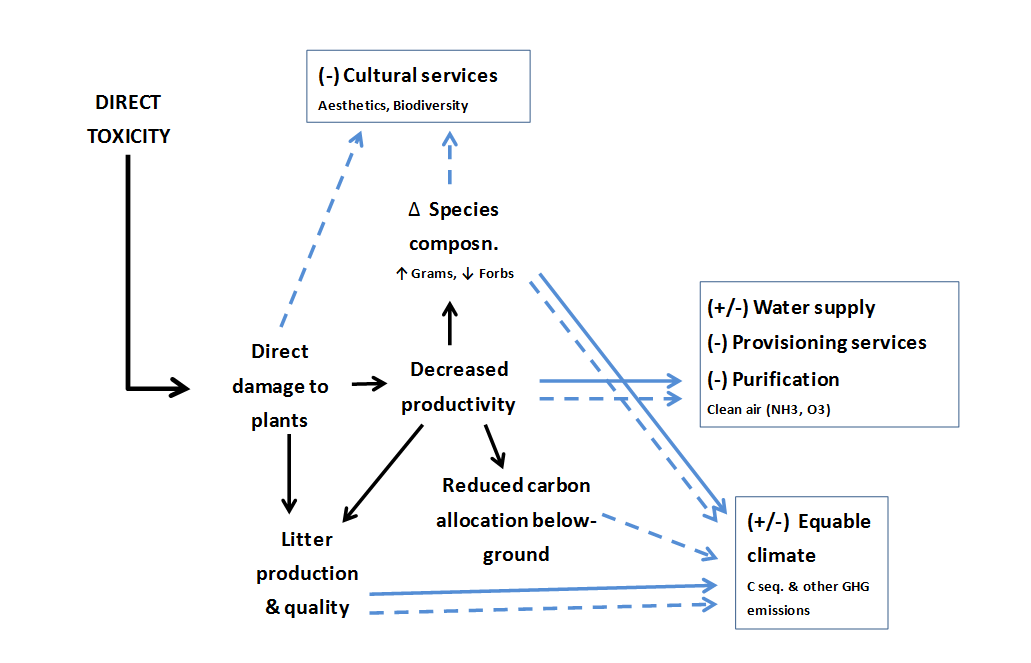 The Ecosystem Services Approach uses a marginal cost approach to valuation, i.e. it looks at the impact of changing from one level of pollutant to another as part of a scenario analysis over time. Typically in the UK this has been applied to assess the benefits achieved so far by reductions in air pollutants such as nitrogen and sulphur, and the likely effects of future changes in pollutants, including the projected increases in ozone concentrations.

For each service, environmental economics techniques are needed to attach a value to these pollutant impacts. For market goods such as timber or crops this is relatively easy, but is much more challenging for non-market goods such as improved water quality of rivers for recreational fishing, or appreciation of biodiversity, where different forms of valuation methods are required. These include stated preference techniques (Willingness To Pay), or revealed preference techniques (e.g. travel cost methods), and usually involve value transfer, i.e. applying values derived from primary valuation studies in other situations because there have been very few valuation studies conducted on pollution impacts to the natural environment. Two examples of applying these economic valuation techniques to air pollution in a UK context are given below.

In one study (Jones et al. 2014a) the marginal costs of historical reductions in nitrogen deposition on six ecosystem services were assessed and valued (Figure 4). In the assessment there were both costs and benefits due to declining N deposition over the period 1987 to 2005. There were costs associated with declines in livestock production, timber production and also carbon sequestration in tree growth. However there were benefits associated with decreased N2O emissions: improved upland stream water quality for fishing; and appreciation of biodiversity. The benefits, mainly to cultural services outweighed the costs which were mainly linked to provisioning services. This highlights a key issue of the ecosystem services approach, which is to aim to quantify impacts across a range of ecosystem service types, to provide a more holistic view of the effects. The net benefit (as Equivalent Annual Value) due to declining N deposition was £65m (range £5m to £123m, 95% confidence intervals).

An earlier study (Mills et al., 2011) compared the relative effects of ozone pollution on crop production in a typical current year (2008) with those in a hotter, drier year more typically expected in the future (2006). Using the ozone flux (leaf uptake) parameter, POD6 (Phytotoxic Ozone Dose above a threshold of 6 nmol m-2 s-2) and the mean farm gate value over 1996 - 2009, this spatial assessment of losses indicated that ozone effects were likely to be higher in the typical year (2008) than in 2006 for wheat and oilseed rape due to enhanced ozone leaf uptake under the more moist conditions.  Effects on wheat were predicted to be greatest in the north east  of England in 2006 where there was sufficient soil moisture for ozone uptake by the leaf pores, whilst climatic conditions were conducive to high ozone uptake and therefore ozone effect in 2008 in central England and East Anglia, the main bread wheat growing areas of the UK (Figure 5).  Total economic effects were predicted to be £91.2m, £32.9m and £0.3m in 2008 for wheat, oilseed rape and potato respectively, and £77.6m, £25.0m and £9.9m in 2006 for the same crops. 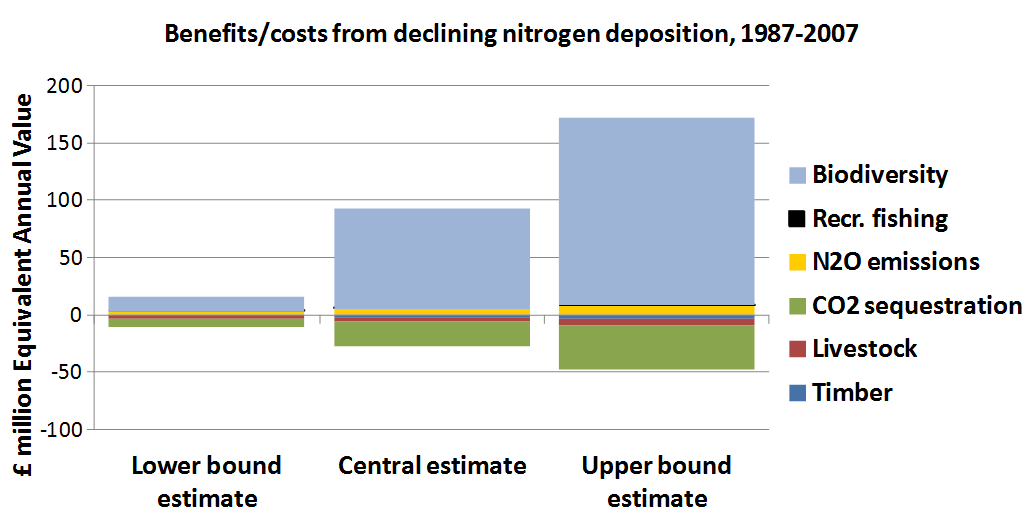 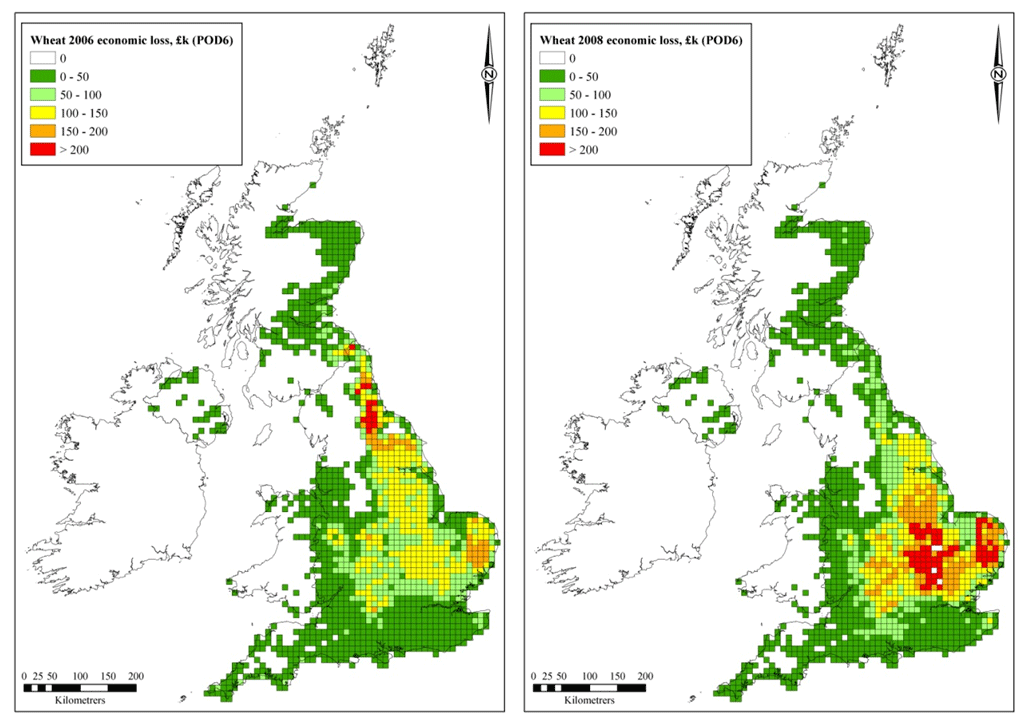